I (Ramon) often get this question, naturally because people are curious, and also because the concept of Qi has traditionally been mysterious for the Chinese and especially for Americans. After all, it’s a Chinese word to start with, and then it seems rather strange (after all) that sticking needles in the body would do something. Or does it?

After all, we expect surgery to “work” or medication, when factually speaking, in most cases surgery is rarely considered successful within one or two attempts and medications are often misused or used without respect to their mutual interactions. I routinely see 10, 15, or even 20 interactions (most ever was 52) in patient’s drugs that are well documented I almost guarantee you that the patient has no idea. Most patients have no education from their doctor as to how pharmaceuticals are supposed to work. The classic example being the difference between Aspirin and Tylenol.

That Tylenol(R) is “acetomenopen” and is NOT an NSAID like Aspirin is. It is instead an anti-fever medication.

Did you also know that it is one of the most highly toxic OTC drugs on the market and is one of the most abused or misused drugs out there. Once you OD on acetomenophen, it will kill you, and shut down your liver and there is nothing short of a transplant that can save you. So for your own sake, take only as directed, and never combine with Ibuprofen or Aspirin.

But somehow the acupuncturist and herbalist is supposed to know exactly how the seemingly miraculous results of their medicine are supposed to work. In biomedicine the tongue-in-cheek or even bold-faced-lie that they know precisely how it works is often passed on to continue the presumption of expertise. But it is really quite irrelevant if the doctor has any idea how it works but only that it can work and that the patient believe it will because by-in-large most pharmaceuticals rarely outperform the placebo (which Traditional Chinese Medicine does not technically have a placebo effect; the mind is 80% of the therapy to begin with!)
Still… we don’t mind having to express in common, everyday language how it works because:
So there you have it, it works by all of those methods… now the bigger question:
[gap height=”30″]

How come it sometimes “doesn’t work?”

Practitioners and patients alike are exacerbated routinely by this problem. And it seems from research that there is an issue sometimes with potency. No surprise this is a complicated question, so let’s examine three reasons why/when acupuncture would be ineffective as a modality:
[gap height=”30″]

1. Acupuncture is the WRONG MODALITY [for this stage of the treatment].

It’s not that it’s “wrong” per say, it’s just not that effective at the DEPTH of the problem, pathogen, disease, etc… it may be that the channels are blocked, altered, absent, too weak, or for whatever reason cannot affect the internal or external condition of the patient. 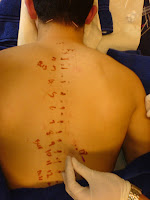 That’s why we have more modalities…to clear those blocks or approach the problem from another angle.

For example if the patient has a fear of needles, and placebo (mind) is 80% of the treatment, then needling is already fighting an uphill battle. Or what if the muscle (channel) or nerve is missing?

Make sure when you start any therapy, you understand what you’re doing and why..

2. Acupuncture requires building momentum… did you try it long enough?

It’s always amazing to me how many people expect a chronic problem they spent 1, 2, 10 or more years creating to go away in one needle session. They expect that they have to see or feel the change right away…But: they didn’t see or feel the changes that led them down a path of self-destruction and chronic disease, how would they notice things improving when they are not yet [often at all] connected to their body or have any intuitive connection to it through nervous system sensations?

Sure they might see things on the skin but to evaluate a problem that way is as the saying goes “only skin-deep.”

We use (and are the only practitioners trained) to understand the internal body through the pulse and tongue, so what could others expect without such training? We can tell you if you’re improving before you notice anything.

Above all, you must cultivate patience with yourself and with the process to undo what has been done.

3. Acupuncture IS WORKING, you just don’t understand the healing process….

As is often the case with people, they are not simple, mechanical instruments but complex, onion-like organic machines with complex feelings, reactions, stimuli, responses, and memories. The body has inertia to change, and then again it makes layers for protective and storage purposes. It also has a certain momentum in the disease arc that must be reversed. As you undergo healing, a lot of energetic and physical intervention therapies is about ADJUSTING the protective mechanisms to unwrap or release deeply laid issues within the body…So bear in mind the fact that while you may not feel or see anything happening, by definition of scientific fact: something must be occurring because a needle has been plunged into the body, how could it NOT change?

It just may take you time to really see the effects, and if your acupuncturist doens’t give you the right expectations then that’s one thing, but perhaps you may have wild, fantastical expectations not based in the medicine’s proven art. I wanted to add a visual example of the most common reason why people do not feel acupuncture the first time does anything… Take a look at this image. Our body has dividing mechanisms and defense strategies for putting old pathogens, traumas, and backed up unwanted “gunk” such as clots, fat, plaque, and heavy metals into different compartments. Why does it do this? It is trying to protect the inner parts (down the highway) from invaders gathering en masse together to hurt you.

So now you’re shiny beautiful Lamborghini needle comes down the highway and encounters this. Supposing even your car is the batmobile and can just plow through that “gunk” it still is going to take awhile to clear all that out.

It’s very important with any therapy, modality, and practitioner that you trust in the process. Half or more of healing is getting into the right mindset. I know a lot of people have been hurt by the medical industry (as indeed it has become an industry). That doesn’t mean every practitioner is out to “Get you.” The only way you can change anything is by submitting to a process and letting go of inherent beliefs, biases, and especially fears.
~Shifu Ramon
[gap height=”30″]
2Shares
PrevNext