Hips, Low Back, and the GUI System as an energetic system.

“Arty, stand up,” said Emily the Acupuncturist.
After performing some physical eam she said, “OK, you can sit back down.”

“What’d you see, my sciatica?”

“We already went over this you don’t have true sciatica, what you have is more complex. And besides what I noticed is that your hips are not straight.” 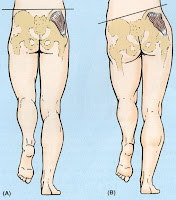 “What do you mean? I know I have one leg shorter than the other…”

“Well not really… what you have is anterior pelvic tilt on your right leg, and sacroilliac (SI joint) immobility. This means that you have difficulty moving your right hip correctly. Because of this, you get shortened, and uneven muscles. This makes them spasm and pinch the nerves.”
“I thought he had atrophy type spasms?” Sclerosa asked.
“He does in his legs, but his glutes have less atrophy and more spasm. The glutes tend to atrophy less because we use them so much, while the hamstrings only get worked out in full extension. At any rate, this is a large part of your issue.”

“i try to get the chiro to work this out as much as possible,” Arty said, “But it seems to come back. I have a bulging disc, ya know…”

“Right, let’s talk about that. Firstly, when did you acquire it, last week?”
“Oh heck no… not for years now. Got my last lamenectomy about five years ago, fused some vertebra.”
“But it still hurts, right?”

“Yeah. Not the same, but still there. Used to only be one sided, but now it’s both.”

“Correct, that’s because it isn’t a bulging disc issue anymore. You see… when you first injured the disc it probably put you down for a few hours… then the next time was a few days… then the third time was weeks of pain, but eventually it healed.” (see right)>
“Yeah, but the very last… I wasn’t doing anythig major and I just picked up a dropped envelope and BAM, that was it. Lights out, I was down… Rosa had to call the ambulance.”
“He wasn’t able to even walk and his breath was very shallow.”
Emily nodded, “That is called Cauda Equina Syndrome… at that point you had to have surgery. Your orthopedic specialist had probably told you to lay off the lifting especially while twisted since this increases the sheer forces in the disc… but once you overworked it and then it was swollen, it didn’t take much. Now you have to live with that, but that’s not the problem anymore,” she said.

“Wait, before you go on… are you saying I could have prevented this?” “Well, it’s difficult to say for sure, but I think yes. A mixture of core-strengthening exercises, alignment adjustments, reduction of inflammation, and proper hydration & supplementation and you woul dhave stood  good chance. Even then, you can’t rely just on acupuncture, “she warned, “BUT now, your issue is as before, a facet issue.” “Facets are little joints with short ligaments between the vertebra. They cause 80+% of the joint deformaties and pain that people experience, because they don’t receive regular adjustment, or have bad traumas, postures, or genetic issues like spondylosis, spondylithiosis, spina-bifita, or scoliosis.”
“So what can you do?”
“Chiro and acupuncture, and guasha, are the best means alternatively to manage facets. Then exercises like Yoga and Tai Chi allow you to build your spine up and correct alignment issues, and the stretching would even help the piriformis issue – as long as you don’t stretch cold and cause an issue.” “What else?”
“Well now let’s talk about the consequences of misalignment and a sedentary lifestyle… so nerves being pinched is a very macroscopic example, and painful one of channel Qi stagnation. That has long term consequences. Not only atrophy, or raised blood pressure, but also oddities such as benign prostatic hypertrophy which is caused by a lack of regulatory growth and of course repeated microscopic trauma to soft tissues.”

“So you’re saying sitting on my butt all these years is related?”

“Yes, and a number of risk factors including diet, stress, and genetics… But by in large it was the lack of Qi flow through the GUI system that caused your problems. We call it Qi Lin or energy deficient urinary incontinence.”
“Well that is accurate. I can’t hardly push it all out, and then it dribbles when I go too… up to seven times a night.”
“And the ED…” Sclerosa piped in.
Arty sighed, “yeah, my plumbing is all broken, doc.”
Emily chuckled with the rest of them, “Maybe not forever. Of course a faster way to fix the issue is to get surgery, and as long as it goes well it works. But if you are afraid of side-effects and risk… especially given your Qi deficiency… then you should consider herbs and local acupuncture.”
“What would the herbs do?”
“Build your Qi and make you urinate more smoothly, hopefully fully voiding. It won’t be at first, but after a few weeks, you should notice a large difference…”
“And the acupuncture…. do you puncture the bladder or what?”
Emily laughed, “No, no… but the needling is in the groin area. We have a point called the ‘prostate point’ and also some that regulate the bladder.”
“What about the ED?” Sclerosa asked.
Arty piped in, “Shouldn’t you be asking about your own issues? You know she gets these frequent UTIs… and she has leakage…”
“All signs of dampness (humidity) proliferation,” Emily nodded, “and again the solution is herbal. We have a series of urological formulas that treat UTI or ‘hot lin’ we call it, and gynecology ones for leukorrhea.”
Sclerosa threw back at Arty, “He’s one to talk…. did he tell you about his hemorrhoids?”
Arty shook his head, “She always wins.”

“Hemorrhoids have, as many things do, a hot and cold type, or rather than cold, a deficient type. The signs of hot type are bright red frank blood in the stools. Whereas the deficient type have just red streaks and a dragging sensation in the anus.”
“I just get red streaks, but I have really black stools otherwise.”
“Which I find strange,” Sclerosa said, “because mine are like fatty/white stools.”
Emily thought for a moment. “So Arty, your dark stools may be a serious condition… we’ll talk about that when we get to your abdomen in a minute. The red streaks mean you have Qi deficiency hemarrhoids, and your Qi building formula would help that out. So would the BPH treatment.
“Sclerosa,” Emily continued, “your condition could be minor or serious, depending on the cause. So I’d like to know more in a minute. In either case you should inform your GP immediately and never lie saying you’re regular when you’re not. Constipation can be a serious issue requiring hospitalization. It can range from telescoping of the intestines to appendicitis, to mineral deficiencies or anemia, or simple dehydration.”
[responsive]

“Believe me, I know it’s serious. Went to the doctor and found out I have diverticulosis.”

“That is a result of chronic constipation. And we need to manage that herbally. One thing you should try first is Epson Salt drinks or Senna Tea. But Senna is not something you should have all the time, just as needed. For chronic stubborn constipation you can use miralax and/or one of our herbal formulas. regardless of what you do… do something. And get your colonoscopies regularly, colon cancer is very operable if detected early. But once it metastasizes, it’s highly deadly.”
“Can we talk more about my leukorrhea?”
“Sure, Sclerosa,” Emily said.
End of Issue 4.
0Shares
PrevNext